America’s health care system is eager for biosimilars, especially in light of mounting evidence that they deliver increased patient access and savings by providing competition for costly brand-name biologics. Biosimilars are lower-priced versions of brand medicines that have been projected to save as much as $54 billion over the next 10 years for a range of debilitating and life-threatening diseases. Widely available in the European Union and around the globe, and with more than 20 biosimilars now approved by the U.S. Food and Drug Administration (FDA), biosimilars hold the potential to be an integral component of efforts to reduce the high cost of brand-name biologics and enhance patient access to lower-cost treatments.

Unfortunately, significant barriers stand in the way of greater utilization and adoption leaving America’s patients and payers to lose out. In Part I of this series, “Failure to Launch: Patent Abuse Blocks Access to Biosimilars for America’s Patients,” the Association for Accessible Medicines’ (AAM) Biosimilars Council found that delayed launch of biosimilars due to patent thickets has cost the U.S. health care system an astounding $7.6 billion in lost savings since 2015.

However, savings are also being missed as a result of barriers to adoption. Based on a review of U.S. biosimilar launches, the Biosimilars Council found that despite significant price discounts, few of the nine biosimilars available to patients have been able to garner significant market share. This is a direct result of anti-competitive market access tactics by brand-name companies, along with inadequate incentives for their use and insufficient information for patients. Taken together, these post-market barriers have slowed biosimilars adoption, adding upwards of $2.2 billion in potential lost savings since 2015 to the $7.6 billion.

This Biosimilars Council white paper will provide an explanation to the perverse mixture of brand-name biologic companies’ anti-competitive market access tactics and inadequate incentives that have cost the U.S. health care system billions of dollars in lost savings. 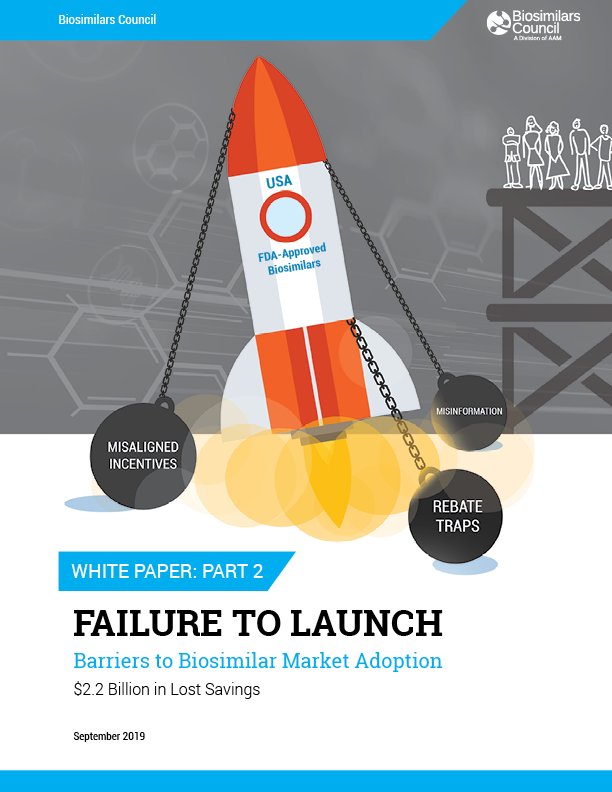 Sick of paying outrageous prices for your prescription medicines? Send a message to your lawmakers to tell them, “This Doesn’t Add Up.”

About the Biosimilars Council

The Biosimilars Council, a division of the Association for Accessible Medicines (AAM), works to ensure a positive environment for patient access to biosimilar medicines. The Biosimilars Council is a leading source for information about the safety and efficacy of more affordable alternatives to costly brand biologic medicines. Areas of focus include public and health expert education, strategic partnerships, government affairs, legal affairs and regulatory policy. More information is available at www.biosimilarscouncil.org.